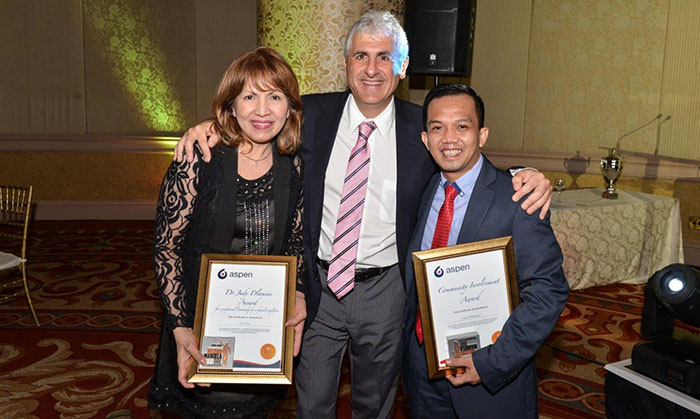 To step up efforts in the Asian Pacific region, Aspen chose the Philippines as a sales, marketing, and distribution center and as a gateway to the rest of Asia. Aspen Philippines was officially launched a little less than three years ago under the leadership of Marcelina “Ace” Itchon, who is its President and CEO.

This November, the global company Aspen Pharma held its first ever Aspen Global Awards at the Global Strategic Leadership Conference in Johannesburg, South Africa. The awards are meant not only to attract employee engagement and performance, but also recognize employees in their outstanding accomplishments.

Part of this event was the celebration of Nelson Mandela International Day, a global initiative in honor of the late Former South African President Nelson Mandela commemorated annually on his birthday, July 18.

This year the regional business units from 29 countries initiated 58 projects across six continents for some 50,000 beneficiaries. This endorses Nelson Mandela’s call for this initiative to extend beyond July 18 and for all citizens around the world to “take action, inspire change and make every day a Mandela Day.” As one of 15 regional business units, Aspen Philippines was nominated for an award as a group working as a team to achieve the same goal of Outstanding Community Involvement.

Aspen’s team based in the Philippines selected four projects to support on Mandela Day.

Staff collected funds for the victims of the typhoon that recently plundered Tacloban. The much needed financial contributions were well received and will assist the Tacloban residents with the rebuilding a school stage, putting on a new roof, repairing damage to the walls and then repainting these. Aspen also distributed relief goods and Christmas tokens. In addition, the team conducted a medical mission for the typhoon victims.

At Napindan in Taguig City a second project focused on the Aspen team donating a newly painted perimeter fence and playground to the school. Two scholarship opportunities were also announced for students graduating with a 90% grade average or higher. Hygiene lectures were also provided and a kiddie party was hosted with each child receiving a hygiene gift pack. Aspen Philippine’s support for this community is ongoing focusing on health, nutrition, education and social innovation initiatives for the balance of 2014.

In collaboration with the South African Embassy, Aspen Philippines also embarked on an outreach program for the children of the Batak, the indigenous people of Palawan, and provided medicines for this community.

Members of the sales force who are out in the field engaged in Acts of Random Kindness (ARK), giving strangers 67 minutes of their day by sharing a meal, handing over clothing or small items such as toiletries.

Back in Johannesburg, the Philippine team won two of the six global awards. Aspen Philippines officially earned the honors of being the first titleholder for the following global awards: Global Award for Community Involvement, and Exceptional Leadership by a Female Employee (Marcelina Itchon).

Not only are they the first title holders of the above awards, but the first and only country to bag two awards in one year in the first Aspen Global Awards.

For more information, contact Aspen Philippines through their landline number (+632) 792-8000 |