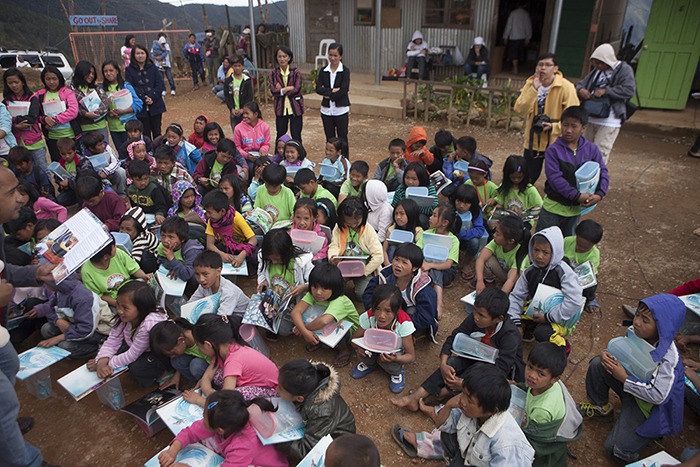 Going beyond the boundaries to instill the value of Tibay ng Loob among children. Schoolchildren of Mt. Pulag Primary school listen attentively during the Alamat ng Matibay storytelling session.

The program is a collaboration between BEAR BRAND PMD, Klasrum ng Pag-Asa, The Storytelling Project, and Art Attack with the aimto reach and help students who live in remote areas.

According to Willy De Ocampo Jr., BEAR BRAND Powdered Milk Drink Team Lead, these organizations share common goals with BEAR BRAND to help children face every problem as a challenge and every defeat as an opportunity to grow.

“The partnership of BEAR BRAND with the three organizations allowed us to reach more students who need tibay ng loob in order to have the motivation to become better at what they do,” De Ocampo said.

De Ocampo emphasized that the efforts to impart the values of Tibay ng Loob was complemented by Klasrum ng Pag-Asa as the organization prioritizes the building of more classrooms to improve the children’s education.

Atty. Angelo Valencia, a representative of Klasrum ng Pag-asa, said that “while we build sturdier rooms for children, BEAR BRAND strengthens the character of every child that stays in those rooms.”

Mr. Rey Bufi, Founder of the Storytelling Project, an organization that advocates the importance of reading to children in remote communities, emphasized that when the story of Mina—the lead character in the book—was shared to the students, they related it to their daily struggles.

“The students of Mt. Pulag Primary School had to walk three long hours just to go to school.  Mina’s story served as an inspiration for the students. They realized that they can still achieve their goals in life through strength of character,” Mr. Bufi said.

He added, “Ang pagkakaroon ng Tibay ng Loob, katulad ng ipinakita ng bida sa kwento, ay ang simula ng pagbuo ng tiwala sa sarili. Through an inspiring story like this, we want children to see how far they could go if they have the courage to kick start their dreams. And BEAR BRAND helped us in making that vision possible.”

Just like stories, artwork is the students’ way of sharing their own adventures. This is why Ag Sano,the Founder of Art Attack, thanked BEAR BRAND for helping their students realize their creative potentials.

Art Attack is an arm of Klasrum ng Pag-Asa, which aims to transform the way children learn through colors. They teach children to recreate art and help boost a child’s creativity.