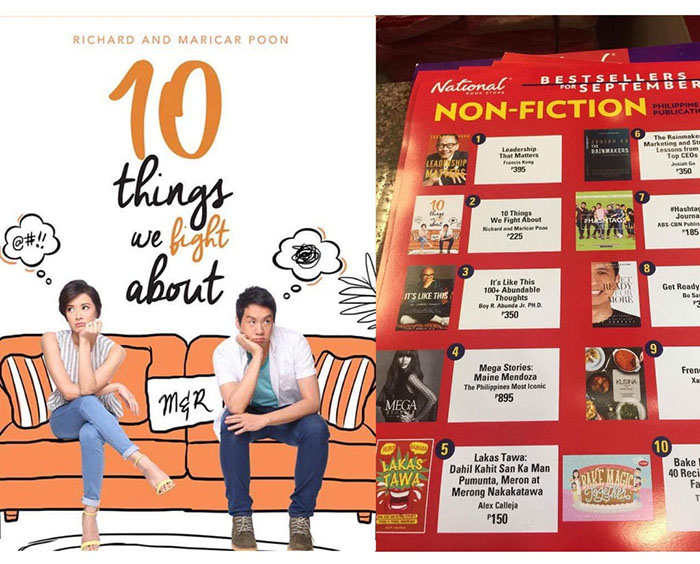 Published only a few a months ago in August, celebrity couple Richard and Maricar Reyes-Poon’s book, “10 Things We Fight About,” under ABS-CBN Publishing, is now among National Bookstore’s (https://www.nationalbookstore.com) bestselling non-fiction titles, ranked at No. 2 as of this writing.

“10 Things We Fight About”  has won readers over with its fun, engrossing “He said, She said” style, with Richard and Maricar taking turns in sharing their experiences as a couple, particularly how they iron out misunderstandings.

The topics range from the serious to the trivial, including how the two deal with each other’s peculiarities.

Colorful and lively, the book is further enhanced by playful photos and cartoon caricatures of

Richard and Maricar in various moods.

The two admitted to have been inspired writing the book after receiving positive feedback about their blogs under RelationshipMattersPH.

The couple acknowledged the challenge on their part to come up with something inspirational, practical, & introspective, while being real and honest about real-life conflicts.

Thankfully, in the end, the whole process proved rather fun and educational for both.

To show appreciation to fans, Richard and Maricar have opened themselves up to the idea of doing a nationwide mall and school tour where they will engage audiences in live discussions regarding the book. Just contact 0917-5504307 or 02-7097554 for inquiries. You may also purchase the book online at https://www.nationalbookstore.com/10-things-we-fight-about.

Richard and Maricar will be also be opening a contact at their site:

www.relationshipmatters.ph for people who want to buy signed copies of the book via local shipping.

Grab your copy of “10 Things We Fight About” now. Perfect gift for young couples and waiting singles.