Taking a bite of history and culture with every #TinapayNatin

As a nation tied to a vibrant food culture, beloved staples have become a huge part of the Filipino lifestyle. A popular must-have in every local dining table is bread—a universal favorite that has countless versions lining panaderia shelves across all corners of the Philippines. Apart from history, socio-cultural practices, cooking methods, and traditions, it also carries stories that must be preserved and passed on to elevate one’s sense of pride in local culture and enable one to support local industries.

In celebration of the colorful tradition of Filipino bread-making and to honor of our food culture, Pilmico has partnered with Max’s Corner to spearhead a nationwide bread competition, aptly called the Tinapay Natin Pinoy Bread Baking Competition. 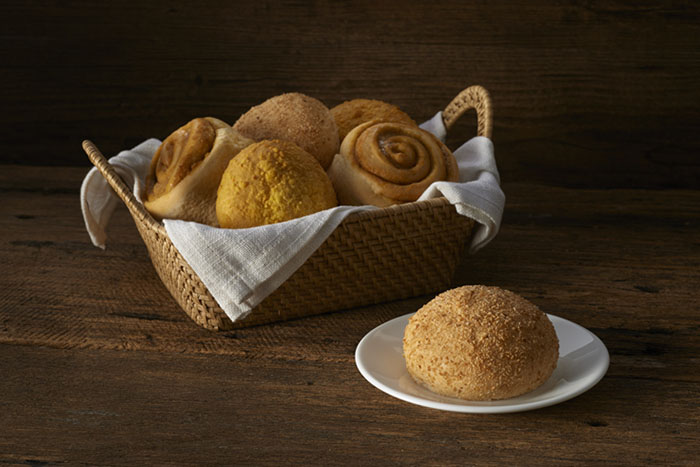 A bearer of Filipino pride and identity

Here in the Philippines, beyond being an ever-reliable snack, bread is also a reflection of each of our province’s culture and history, which have been shaped by various influences throughout the ages.

One of the most important Filipino breads is the ubiquitous pandesal, which was introduced to the Philippines in the 16th century. It was the Spaniards’ counterpart to the French baguette. Pan de sal means “bread of salt” in Spanish, for the pinch of salt that is added to the dough. Originally, this bread had a hard crust because it was made with wheat flour. Due to the lack of wheat production, Filipino bakers eventually had to use a different type of flour which resulted to the softer pandesal that we find in our favorite panaderias across the country today.

Sparking a renewed love for local breads like the pandesal is the inspiration behind the latest pillar of the Pilmico’s brainchild, Mahalin Pagkaing Atin movement, an advocacy aimed at amplifying the role of every Filipino as a producer and guardian of our food heritage. This year’s Tinapay Natin Pinoy Bread Baking Competition aims to highlight how bread plays an important role in our local food culture and heritage, supporting our rich food history and empowering community bakeries to become storytellers for the land and the people.

“Bread is a reflection of our identity and our people’s history and affinity to food and agriculture,” says Carlyn Trota-Salud, Max’s Bakeshop Inc. President. “With a wide variety of breads enjoyed by Filipinos around the nation, each region definitely has a native bread—a Tinapay Natin—that tells a unique story about its origin and its journey.” 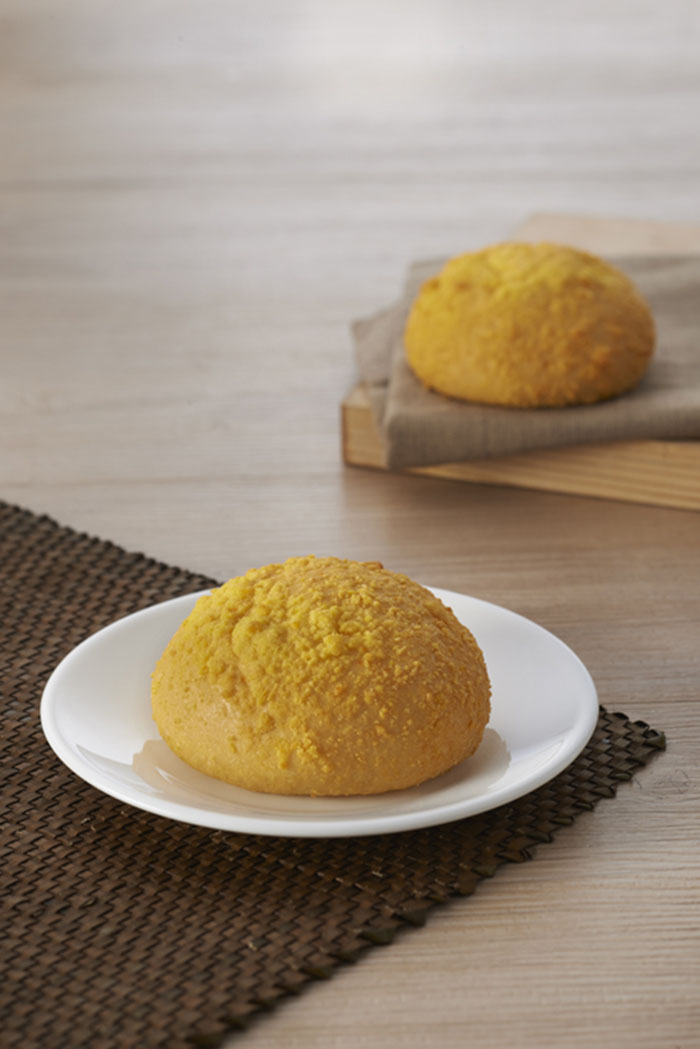 Every food in every region is a direct reflection of the land, from the ingredients and methods used to the flavors and names of each one. More than just being a competition, the Tinapay Natin Pinoy Bread Baking Competition also pays tribute to our regions’ distinguishing local identity, culture, and produce by sharing the inspiring stories that each local bread variant carries.

“We thought of an initiative anchored on encouraging Filipino bakers to pursue and share their passion for bread and baking, and that’s how Tinapay Natin became a reality,” shares Maribeth Marasigan, Pilmico Chief Resource Officer.

The contest invites young members of society to recreate a beloved traditional bread as well as a modern bread—in the hopes that by inviting the youth to add their own new twist to Philippine bread making, the art can be furthered. It is open to students aged 18 to 35-years old from anywhere in the Philippines. “This isn’t just about making another delicious baked creation. Since each bread carries a distinct story of their own, each group will also be tasked with weaving a tale that expresses how their creation is a representation of a region and its culture,” continues Marasigan.

The competition legs will be held in Manila, Bulacan, Batangas, and Iloilo, respectively. The partner universities, namely Treston International College, STI College-Bulacan, Lyceum of the Philippines – Batangas, and St. Therese College – Iloilo City, will then act as venue sponsors, while also encouraging their own students to join the contest.

The team with a bread concept that clearly carries a unique story, innovation, creativity, and deliciousness will be then awarded as makers of the country’s first Tinapay Natin Pinoy Bread Baking Competition, with either the regional tourism director or culinary heritage expert—or both—providing the preamble as to how the bread perfectly summarizes the inspiring story of its place of origin. 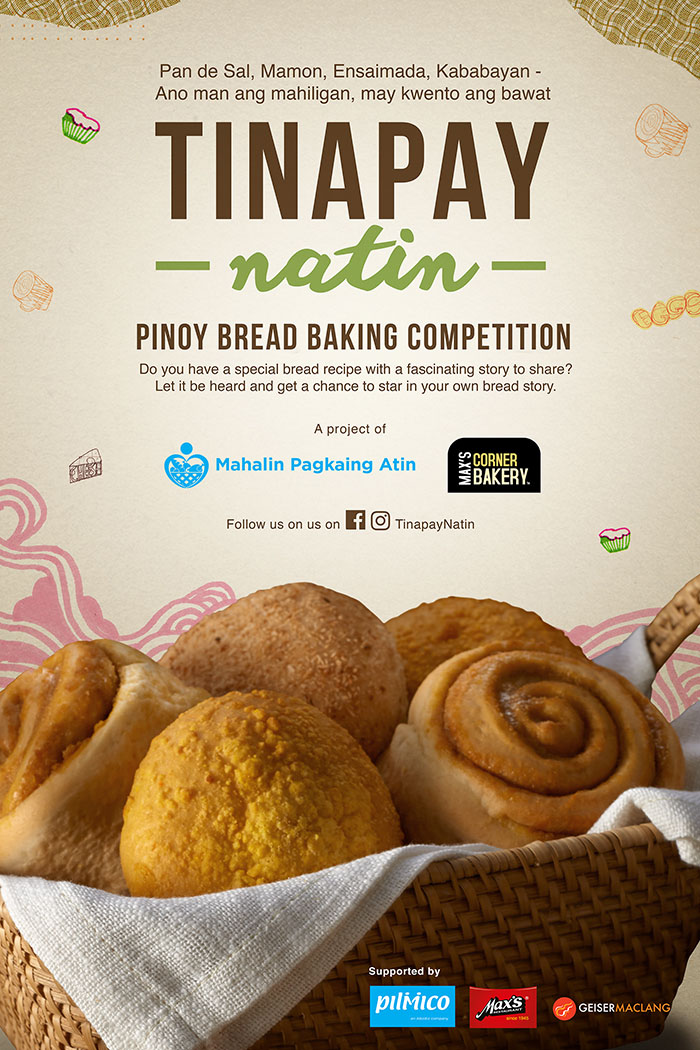 The competition coincides with the mission of Max’s Corner Bakery to promote appreciate for local food, especially when it comes to inspiring a renewed love for baked goods. With this, Max’s Corner Bakery—one of MGI’s oldest and most well-known brands—will be officially distributing the winning bread creation, sharing its captivating bread story, through its outlets nationwide so that the rest of the nation may take part in crafting the first Tinapay Natin ever.

Max’s Corner Bakery itself takes pride in a rich and colorful history that dates back to the 1960’s when its founder, Ruby Trota, baked the first batch of soft bread rolls using a wood-fired oven. It was well-received by the Filipino patrons of Max’s, then still flourishing restaurant. Soon, the bakery expanded its baked goodies to include breads, pastries, and cakes that eventually became the irresistibly delicious treats Filipinos know and love today.

As the competition also aims to encourage and empower the local youth, a predetermined amount from every piece of the winning bread sold by Max’s Corner Bakery will also go to the team’s chosen public school beneficiary.

“Thanks to Filipino ingenuity and an unyielding passion for bread, it is not difficult to see our bread culture carry on through the generations with more Tinapay Natin creations joining the esteemed roster of breads that tell our distinct Philippine story,” ends Marasigan.