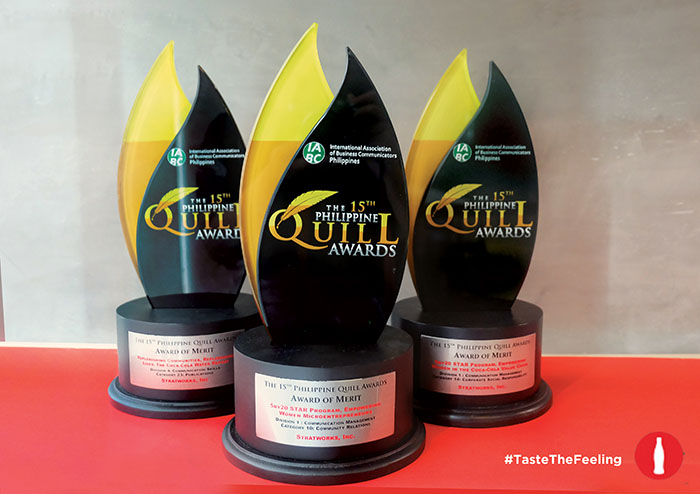 Coca-Cola received two merit awards in the communication management category for its 5by20 Sari-sari Store Training and Access to Resources (STAR) Program which economically empowers women in various sectors with the help of the Technical Education and Skills Development Authority and the Department of Labor and Employment.

Since its launch in 2011, the 5by20 STAR Program has impacted the lives of over 80,000 women micro-entrepreneurs across the country.

Coca-Cola also received a merit award in the communication skills category for its “Replenishing Communities, Replenishing Lives: The Coca-Cola Water Report” publication which narrates the impact of the Company’s Agos Program among its beneficiaries.

“We, at Coca-Cola Philippines, are honored to receive these awards that recognize the effectiveness of our sustainability programs in making a difference in the communities we serve and the lives of Filipinos,” said Atty. Adel Tamano, Coca-Cola Philippines Vice President for Public Affairs and Communications.

The success of the sustainability programs of Coca-Cola have been made possible through partnerships with government and non-government organizations for its implementation, the Coca-Cola Foundation Philippines, bottling partner Coca-Cola FEMSA Philippines, and with public relations firm, Strategic Works, Inc., for the communication amplification of the programs.

Organized by the International Association of Business Communicators (IABC) Philippines, the Philippine Quill Awards is an annual competition that recognizes excellence in professional communication.