Via Mare: The Living Legacy of Filipino Food 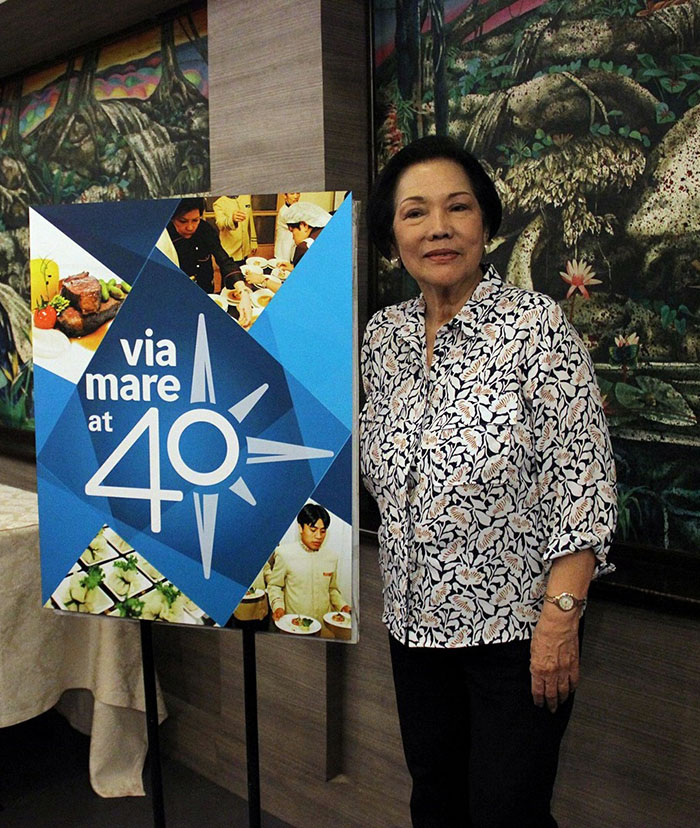 Unlike other cuisines’ penchant for presentation, Filipino cuisine is served in a more family-oriented manner–without the pomp and frills. And just as many islands there are in the country, so is the number of variations a single dish could possibly have.

But things changed in September 1975 when Via Mare Seafood Specialty Restaurant opened its doors to the public. After the very first dish was served, Filipino cuisine was never the same again.

The restaurant did not only change the Filipino’s perception of its own cuisine, it also brought global recognition to the sophistication and complex flavors of the Philippines. Via Mare’s chef Glenda Barretto, who has been at the helm of the restaurant since its inception, and her strong belief in the Filipino cuisine’s potential to be world class is what pushed the restaurant to keep outdoing its achievements.

While Barretto’s contemporaries would focus on intercontinental cuisine as their piece de résistance, she opted to highlight and present well-loved Filipino dishes with modern touches that made it more palatable to foreign guests. If lumpia was known as a roll, the Via Mare version had the filling wrapped in pouches held together by spring onions. The tinola was also given a fresh take by serving the soup in a carved papaya or as a flan, inspired by the Chawanmushi of Japan.

“The past 40 years is not only the story of a restaurant, it is a story of the Filipino people,” Barretto said. “Via Mare is our pride as we helped a lot of Filipinos enjoy and be proud of the cuisine that we have here, of recipes that we have enjoyed throughout our childhood, and of what Filipino fine cuisine truly tastes like.”

Since 1975, no other Filipino restaurant has been the top-of-mind when it comes to hosting dinners for dignitaries, heads of state, international celebrities, and international events. From beauty queens during the 1995 Miss Universe pageant in Manila, the papal visit of then Pope John Paul II, the 1996 Asia Pacific Economic Cooperation Summit, the gala of the Philippine-run of West End’s Miss Saigon, the 2007 ASEAN Summit in Cebu, the weddings of illustrious families, and other milestones in Philippine history, Via Mare was always the top choice.

Via Mare, with Barretto herself leading the kitchen, was also the choice of First Lady Imelda Romualdez Marcos whenever she hosted gala dinners for visiting dignitaries at the Malacañan Palace. The former first lady’s penchant for elegance was apparent even in the food that she served her guests. In one instance, she requested for a more upscale version of the adobo – a request that Barretto easily managed by marinating the chicken in simmering adobo sauce with red wine. Another anecdote from the halls of presidential residence was how Barretto recreated a Mexican dish of squash, baked and topped with cream and caramel sauce based only on the narrative of Mrs. Marcos. The first lady nearly squealed in delight after the first bite.

The restaurant itself has changed over the past 40 years. While it maintained to be the premier Filipino restaurant, it branded itself according to the demands of its wide clientele. Café Via Mare was introduced to the market, dubbed to be a pioneer in introducing the first authentic Filipino café. The Via Mare Oyster Bar was also launched to cater to the more discriminating taste and specialized in serving the most succulent of oysters. 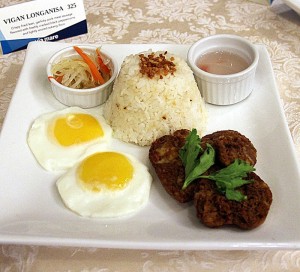 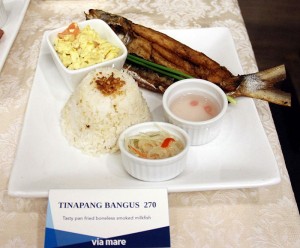 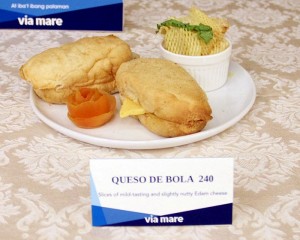 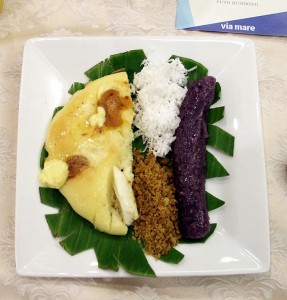 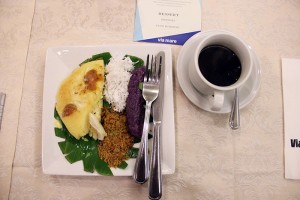 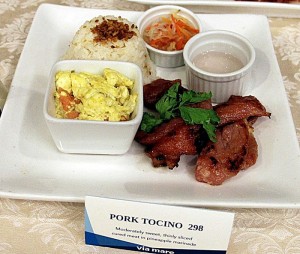 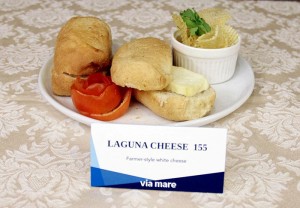 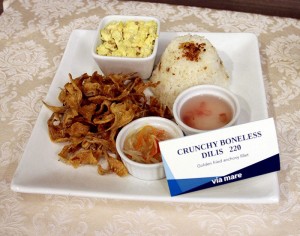 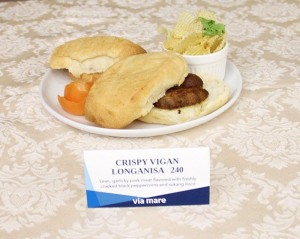 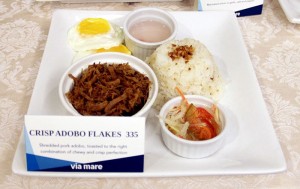 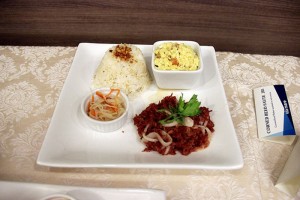 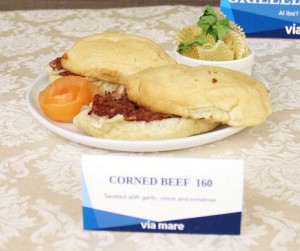 True to its Filipino heritage, Via Mare serves Filipino cuisine that matches the eating pattern of Filipinos: breakfast, lunch, dinner, and merienda – a meal that is served in between the main meals of the day. Pan de sal is a breakfast staple among Filipinos and Via Mare serves it fresh every day, grilled with sides of corned beef, Vigan longganisa, Laguna cheese, and queso de bola. Other breakfast favorites, but can be enjoyed any time of the day, like tapa, smoked bangus, tuyo flakes, and tocino are served under the Altanghap section of the menu, an abbreviation for almusal, tanghalian, and hapunan – Filipino terms for breakfast, lunch, and dinner.

The lunch and dinner menu of Via Mare is not complete without crispy binagoongan, kare-kare, and pinais na alimasag among its wide selection. An extensive array of salads with native greens is also on offer, as well as comfort food like arroz caldo and tokwa’t baboy.

Merienda, or light snacks, are as important as main meals for Filipinos. At Via Mare, diners can choose from well-loved Filipino fare such as puto bumbong, palitaw, and guinataang halo-halo.

Ending scrumptious feasts on a sweet note are iced deserts such as halo-halo and guinomis.

“At 40 years, we have shown the world and most especially our fellow Filipinos, what Filipino cuisine is all about – it is about the freshest of ingredients cooked in influences of our ancestors and the rich heritage of the Filipino nation, sprinkled with the love and affection of a Filipino chef,” Barretto said.

Delight in the well-loved Filipino flavors and savor your classic family favorites at Via Mare. For more information, visit www.viamare.com.ph or like its official Facebook page (@ViamarePH).