ALMOST everyone dreams of going to Paris, France, and seeing the famous Eiffel Tower, The Louvre, Notre Dame Cathedral, Champs Elysées and Arc de Triomphe, and hardworking Filipino careerwoman Alma Cielo Arroyo is no exception. Paris has always been on her bucket list, but never in her wildest dreams did she think that it would come true. Well, just last September, it did. She and her husband Norman Arroyo finally took that dream trip to Paris and spent their wedding anniversary in the City of Lights, together with her mother, Ma. Erlinda de Ramos, and her sister, Ma. Darlynn del Rosario, which made the trip more fun. Together, they travelled in style, enjoying round-trip Business Class seats on board Etihad Airways, going on a 10-day escorted tour put together by Insight Vacations, with visa assistance and other travel arrangements made by Rajah Travel Corporation.

That all-expense paid trip for four to France was Alma’s prize for having been picked as the grand prize winner of The French Baker’s 25th anniversary promo, Visit Paris in Summer 2015, whose lucky raffle ticket she filled out in December 2014 when she dined at The French Baker’s SM-Sucat store with her family. After dropping the raffle ticket in the dropbox, she forgot all about it. In March this year, when she received a call from The French Baker’s Abegail Siega informing her that she had won the grand prize, her first reaction was disbelief—and doubt—mixed with a little skepticism. She did tell her husband about the call, but, not wanting to get his hopes up, she told him pointblank that they would have to wait for the official announcement from The French Baker before being convinced that she had indeed won. After two weeks, when the formal announcement was posted on the FB page of The French Baker, she finally believed and rejoiced over her good fortune.

“My husband and I were together when we saw the FB post, and I literally screamed in joy! I Viber-ed my mom, who was then in the U.S., and texted my sister that it was official. We had won the grand prize, the trip to Paris! To think that I was even hesitant to fill up the raffle coupon because I’ve not been lucky with raffles,” Alma relates. 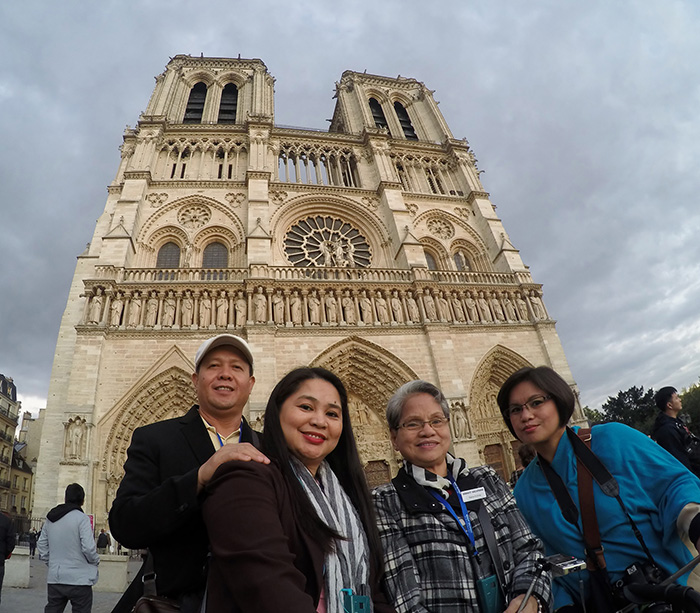 Alma and her husband love to travel and Paris, France and Monte Carlo in the Principality of Monaco located on the Mediterranean coast of France, were two of the cities on the Arroyos’ bucket list. So, imagine their joy upon finding out that the trip Alma had won would take them not just to Paris but also to Monte Carlo—and to the serene city of Avignon located Southeast of France—in just one dream trip!

Since the Arroyos usually travel during their wedding anniversary every September 26, and it was within the six-month validity period of her prize from The French Baker’s 25th anniversary promo, they opted for the September trip, which turned out to be perfect because The French Baker’s founder and CEO Johnlu Koa happened to also be in Paris, France, at that time.  A meet-up was arranged between the Arroyos and The French Baker team in Paris. It was the Arroyos’ third day in Paris and The French Baker team’s last day in the City of Lights when they met in Paris and had lunch together in one of the city’s best restaurants. The French Baker’s founder and CEO gave each of them a rosary and a bottle of Holy Water from Lourdes, where he had just come from, and then they headed for Trocadero, where they had their photos taken with the Eiffel Tower in the background.

Their 10-day trip to France allowed them to get acquainted with Paris and visit its world-famous attractions in the first three days, then,  off to Avignon and Arles, where the group stayed for another three days and got to experience a comfortable TGV train  journey through fertile vineyards and agricultural lands, see the incredible three-tiered Pont du Gard, get introduced to the famous wine of the village of Châteauneuf-du-Pape, and visit an olive mill in Les Baux-de-Provence to sample some of the finest olive oils in France.

Then it was off to the Principality of Monaco. Entering Monte Carlo, a commune in Monaco, was surreal for the Arroyos and Alma’s mom and sister, because the French Riviera was yet another item on their bucket list checked. For the next three days in Monaco,  they visited a perfumery, drove along part of the Grand Prix circuit, walked through the old town to see the Royal Palace (where the Grimaldi family live) and the yacht-filled harbor, visited the cathedral that houses the tombs of the late Prince Rainier and Princess Grace, heard Sunday Mass at St. Vincent de Paul Church, bought some souvenirs from Monaco-ville, and walked through the streets of Monte Carlo at a leisurely pace.

On the 10th and final day of the trip, the group bid au revoir to the sunny French Riviera in the morning and boarded the Etihad Airways plane that would take them back to Manila. It was a bitter-sweet moment for Alma,  “Our trip to France was unbelievably surreal. It made me believe more that miracles do happen. We almost did not make it but, with fervent prayers, we did, and we will never forget the people who were instrumental in making our dream come true. We will forever be grateful to Mr. Johnlu Koa and The French Baker team, as well as their partners in the Visit Paris promo, Rajah Travel, Insight Vacations, Etihad Airways and Canon Philippines. We travelled in style—Business Class airline seats from Manila to Paris and back for all four of us, top-rated hotel accommodations, good food, and tours like no other. It is our best wedding anniversary celebration to date!”