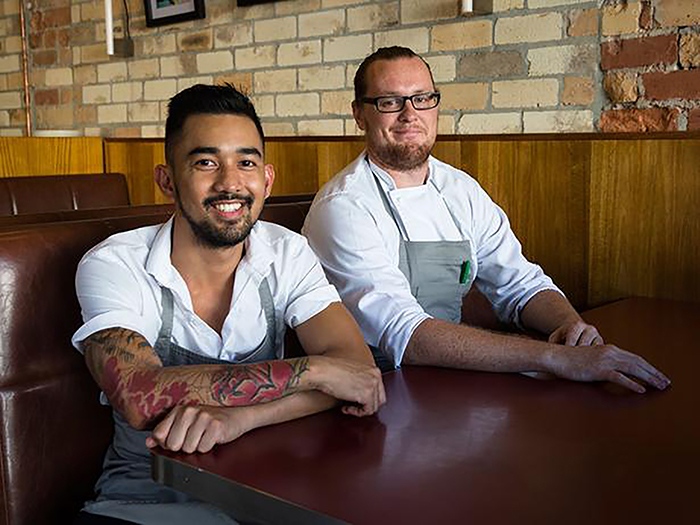 For fresh culinary graduates seeking excellent job opportunities and higher career goals, working abroad is a typical direction especially if they want to make a mark early in their profession. This is the decisive path that Chef Carlo Buenaventura took — and now happily looks back — exactly six years ago, when he chose to explore what the world has to offer through culinary arts.

Although Chef Carlo had an interest in cooking since he was young, his culinary journey didn’t take the familiar route. “My greatest influence was my grandmother, Lola Ludy. But I didn’t take up culinary arts immediately, I finished nursing first. When I moved to Manila, I worked for my uncle in Congress. It was then that I decided to take up culinary studies as a second career since I’ve always wanted to have my own restaurant,” said Chef Carlo.

Upon the recommendation of his friends from Ateneo, Chef Carlo took the 3-month short course on Fundamentals on Culinary Arts at the Center for Culinary Arts, Manila (CCA, Manila). After “testing the waters,” Chef Carlo enrolled in the two-year diploma program.

“What I liked most in CCA is that they offered me a really good program. They have student assistant programs where I gained great amount of actual kitchen work experience,” he added.

As a student, Chef Carlo’s accomplishments include being the youngest member of the culinary varsity team of CCA, Manila. He also joined competitions abroad.

Shortly before graduation, Chef Carlo decided it’s time to try out his luck overseas. He was among the first wave of CCA graduates who ventured for job opportunities in New Zealand, which, according to him, has just opened up for foreign workers at that time.

As he will later find out, New Zealand is indeed a country of immense opportunity for Filipino culinary graduates. Chef Carlo immediately took on various job positions, starting at the Crowne Plaza in Queenstown where he got hired as full time commissary chef and worked there for two years.

In 2012, Chef Carlo also worked at one of the longest standing restaurants in Wellington, the Matterhorn, where he met his business partner and co-chef William Cook. After a brief stint at Foxglove Bar and Kitchen, Chef Carlo then moved to Auckland to work at Orphan’s Kitchen before finally opening a pop-up kitchen called the Cult Project together with Cook.

“Our business philosophy at Cult Project is that food is our common ground. To date, we have a lot of collaborations with major restaurants in New Zealand and in other cities, one of which is with Roots Restaurant this June,” he explained.

While there are a lot of pop-up restaurants in New Zealand, Chef Carlo said they are mostly ran by well-established restaurants. “Through our pop-up, we are trying to create an ‘Auckland cuisine’. It’s indirectly using my influence in the Philippines, our way of discovering our own local cuisine within the city by using the diverse influences and multi-culturism around us with the help of local produce and flavors familiar to Kiwis. That’s how we create our dinners and menus,” he stressed.

Now enjoying a well-earned and blessed career in New Zealand for six years, Chef Carlo recently returned to CCA, Manila to inspire and invite applicants for BurgerBurger, a growing company in Auckland. It is a collaboration between Mimi Gilmour, Adrian Chilton (Executive Chef/Founder) and Chef Chino Salazar (Head Chef) who is also a CCA graduate.

“They really want to hire Filipino chefs. So when my employers asked me to do school visits and orientation for them, I took the opportunity. It’s my obligation almost to share the good news and opportunities to fellow CCA graduates,” he noted.

“I told them to weigh in on their options, as there is so much to explore in the other side of the world, like in New Zealand. Especially now that they are promoting their own cuisine to the world, they are in need of well-trained Filipino chefs,” Chef Carlo commented.

Ready for the next level

Chef Carlo is equally happy that aside from him, there are a lot of CCA alumni who are igniting New Zealand culinary scene. “We have a continuously growing network of CCA alumni.  I’m so proud that CCA graduates are doing very well in their culinary careers. In fact, two fellow CCA graduates, Chefs Jess Granada and Andrew Soriano, are doing a great job in New Zealand with their restaurant Nanam, which highlights modern Filipino cuisine,” he commented.

For young cooks to get their foot in the door, Chef Carlo said that having world-class culinary education is a must as it serves as the best foundation and preparation for the real world.

“Apart from being the pioneer of culinary education in the Philippines, CCA, Manila has taught me not only the recipes; it taught me how to think. Right from the beginning the school has taught us to ‘cook for the world’, that we are not limited to where we are, that the world is our plate. We are taught not to follow the trend, but to be the trend-setter. The instructors and programs offered me a really good foundation. CCA has prepared me for it,” Chef Carlo concluded.

For inquiries on their diploma or short courses, call CCA, Manila at 218-8566, or e-mail: [email protected]. Visit their website at cca-manila.edu.ph.  CCA, Manila campus is located at 287 Katipunan Ave., Loyola Heights, QC. Application is ongoing.