The Waiter that Won Wolfgang’s famous steaks are dry-aged to perfection in climate controlled aging rooms for 28 days, giving them amazing tenderness and flavor.

The life of a waiter is not an easy one. As the few faces of the entire restaurant, waiters deal with complaints about food, prices, unsatisfactory menu items and a whole host of problems completely out of their hands. A full day’s work rushing from kitchen to table can leave a waiter wincing when his tender feet take their first steps out of bed in the morning, and the late hours would leave most falling asleep while standing up. Throughout it all, a good waiter’s eyes should light up and his mouth grin wide at the prospect of seating another group of grumpy investment bankers looking for a bone to pick.

At Peter Luger’s, one of the most established steakhouses in New York, a humble man named Wolfgang Zwiener did all of these things and more. Having emigrated from Germany, he began as a lower-tier server at the famous restaurant and soon earned himself the title of Head Waiter. Zwiener built his nest and settled there for just under 40 years, becoming a well-known face to the regular clientele and forming valuable, lasting relationships with his team. 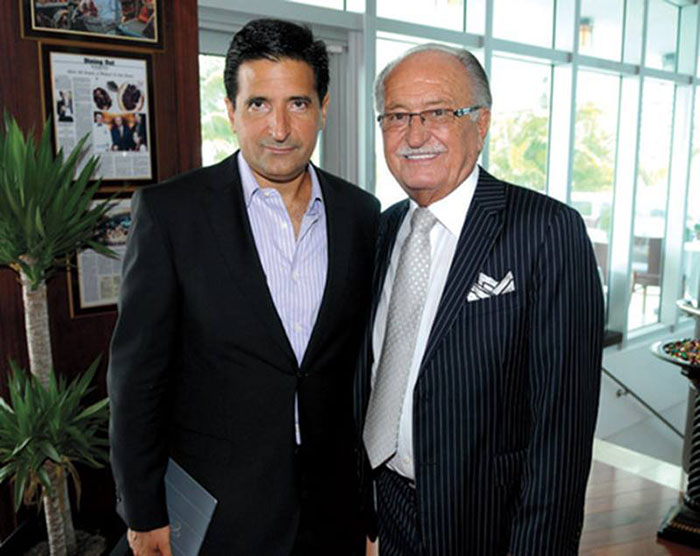 From Father to Son, From Son to Father. Wolfgang Zweiner (right) worked decades as a waiter at New York’s Peter Luger Steakhouse. His son, Peter (left), recognized the great lengths that Wolfgang had to go through to provide for him. So after finishing school, they each made their dreams come true by opening the now-world famous Wolfgang’s Steakhouse.

During the 40 years that he spent at Peter Luger’s, Zwiener achieved a lot. He married, had two sons named Steven and Peter, and managed to put them both through college. Before his worn waiter’s shoes even had a chance to kick back on the footrest of retirement, his son Peter had presented him a gift from a grateful son to a hardworking father: his very own New York Steakhouse.

Using the skills he learned at University, Peter’s M.B.A and own work experience made him the perfect person to partner with his service-wise father. Together in 2004 they opened Wolfgang’s Steakhouse in Park Avenue, Manhattan, and the pair have been tending to its growth ever since.

Today, Wolfgang’s Steakhouse has over 13 locations, 5 of which are in Manhattan alone. Its international branches, including the one here in Manila, serve steaks unparallelled in quality, dry-aged to meaty perfection and cooked beautifully by talented and consistent chefs. The service, an obvious focal point for the owner, is certainly impeccable. In addition to their USDA prime porterhouse steaks they serve lamb and pork chops, a selection of seafood (including fresh local catches), and an extensive list of fine wines sourced worldwide.

Our very own Manila branch brings the New York steakhouse feel right to Resort’s World. Wolfgang’s Steakhouse Manila, which serves the best steak in Southeast Asia, provides a space wherein a dry-aged porterhouse can be enjoyed by both curious diners and eager businessmen alike, adding exponentially to an already thriving foodie scene in the Philippines.

Wolfgang’s is a restaurant that serves more than just steak. It also serves as a reminder that a family’s love can accomplish anything. After all, a father’s diligence and a son’s love made it possible for a waiter to become one of the world’s most successful restaurateurs.

Built on the foundations of hard work and the unbreakable strength of family ties, it is no wonder that Wolfgang’s Steakhouse has managed to earn its title of world-renowned restaurant in under 15 years of its first opening.