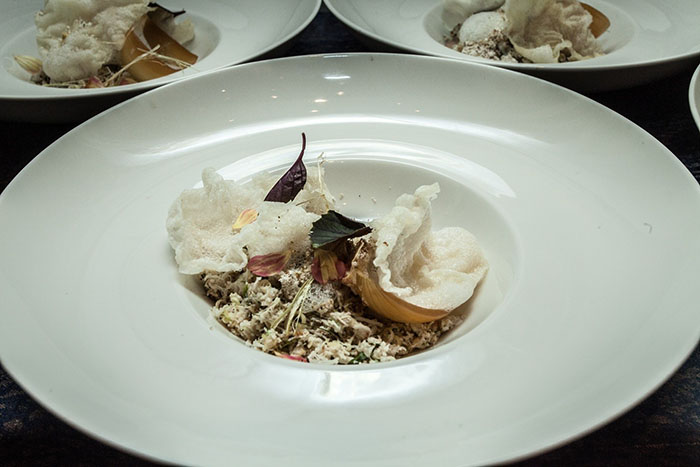 The changing climate and the uncontrolled and wasteful consumption have resulted in concerns on how to continue feeding the planet today and in the future.

This is why the World Wide Fund for Nature (WWF) Philippines, with the mission of “Transforming Lives,” has gathered food connoisseurs and environmental advocates to support Sustainable Food Sustainable Future, a benefit dinner created to educate Filipinos on the importance of sustainable consumption and supporting our local farmers and fishermen by eating local. 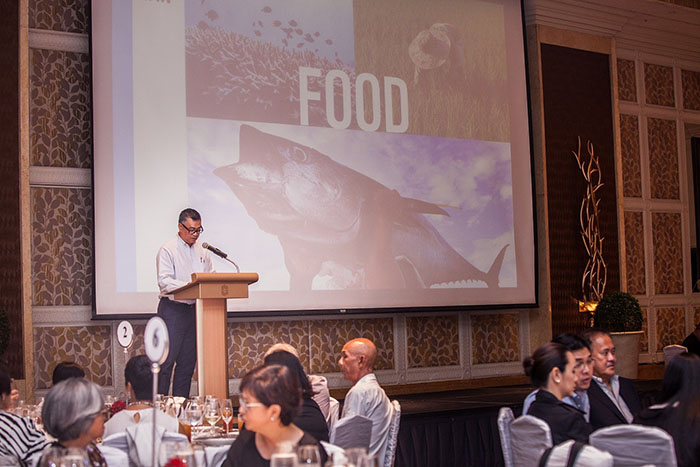 WWF-Philippines President and CEO Joel Palma gave a brief talk on the work that the organization does and zeroed in on food security.

Proceeds of the Sustainable Food, Sustainable Future dinner will go to WWF-Philippines’ campaigns and efforts to secure food sources of the future, aid the livelihood of local farmers and fishermen, and promote eco-friendly means of food production and consumption.

Sustainable food consumption and production involves looking at how resources are used in growing food and taking into account their impact on the environment and the community. This not only results in environmental benefits but also social and economic support such as increased competitiveness of local products, increased employment, and consequently reduced poverty. For consumers, it can mean fresher food with less chemicals and improved health. 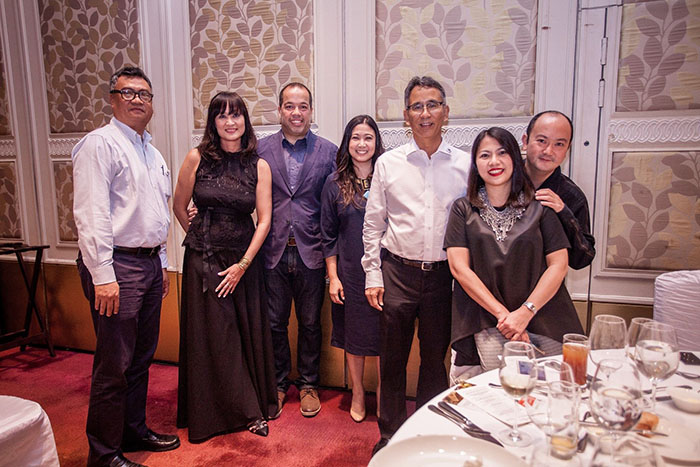 WWF President and CEO Joel Palma shared how food consumption affects not only the environment but the welfare and livelihood of the people and communities who work on food production, like farmers and fisher folk.

“We would like to emphasize that the footprint of the produce not only contributes to climate change and threaten our planet’s future but can also negatively affect the future of those who grow or produce our food. We want to make sure resources are protected and sustained so that they can continue to be the source of livelihood for generations to come.” 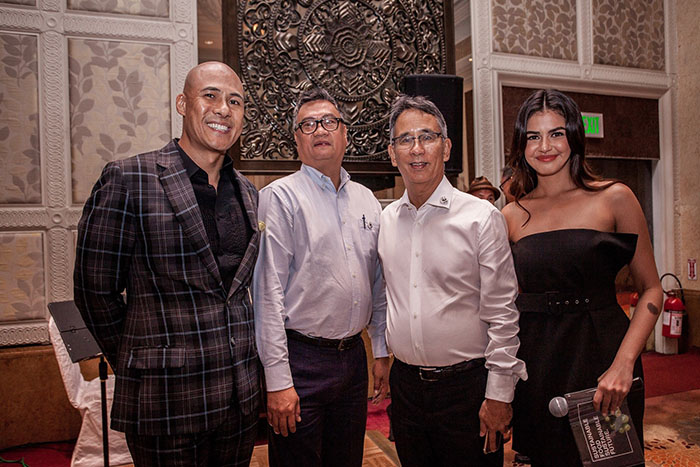 WWF-Philippines National Ambassador Rovilson Fernandez (leftmost) and National Youth Ambassador Janine Gutierrez (rightmost) served as the benefit dinner’s hosts. With them in the photo are WWF-Philippines President and CEO Joel Palma (2nd form left) and Chairman of the Board Aurelio “Gigi” Montinola III (2nd from right).

Meanwhile, Chef Nicco Santos of Hey Handsome talked about how he partnered up with local fishermen and farmers who inspired his restaurant’s menu.  “One of the biggest reasons why I shifted my cooking style is because of sustainability. For me, personally, I find it more meaningful and more fulfilling if I know who’s growing the ingredients. Aside from it tasting better because it’s direct from the source, it’s fresher,” Santos stated.

“Aside from us feeling better about ourselves, it’s more fulfilling that it’s not about us. It’s always about someone else’s lives that we’re helping out. It’s fulfilling when you find that your truest purpose is to really help someone else to make a difference.”

As Chefs are the primary influencers of food cultures and diets, their participation in developing sustainable food habits and produce consumption is a huge help on promoting food security. 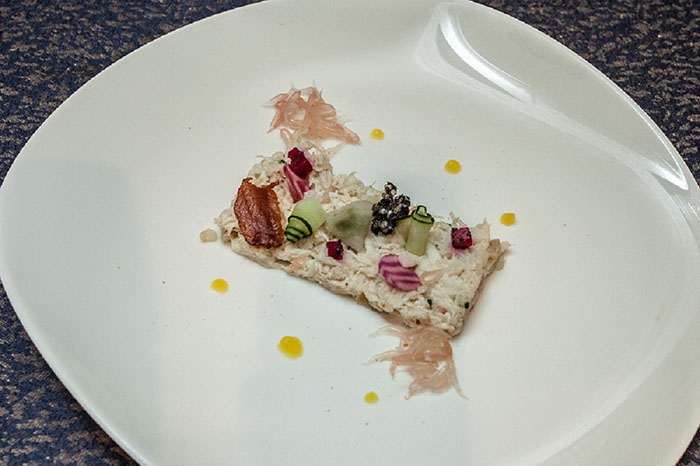 “I think apart from just cooking for people as a profession, chefs of today really need to advocate the science of sustainability and using ingredients that help keep the planet sustainable and the environment clean because in the end, whatever we do is dependent on the produce,” quipped Chef Maragarita Forés emphasizing on the role of chefs and restaurateurs in the campaign to help the environment.

Four glorious pass around canapés paired kicked off the cocktails while the five-course dinner was started off with Weidmann’s Northern Guimaras Strait Blue Crab with Smoked Tanigue Tartare. This was followed by Santos’ Northern Guimaras Strait Blue Crab and Lemongrass Salad on Coconut-fermented Santol Crab Cracker, Gonzalez’and Go’s Yellowfin Tuna Belly with Szechuan and Adlai, Etag, Seaweed and Shiitake Congee, and Forés’and Boutwood’s Aleli’s Pork Loin, Headcheese, Sweet Potato, Humba Pineapple Glaze and Guava Gel, which is an homage to Daila Farm’s Aleli Crespo who sposored the night’s black pigs. The delectable dinner was perfectly capped off by Puey’s and Aspiras’ 64% Davao Dark Chocolate and Over-ripened Mangoes with Auro providing the chocolates used. Wines that complemented the courses were courtesy of one of the event co-presenters, Bacchus. 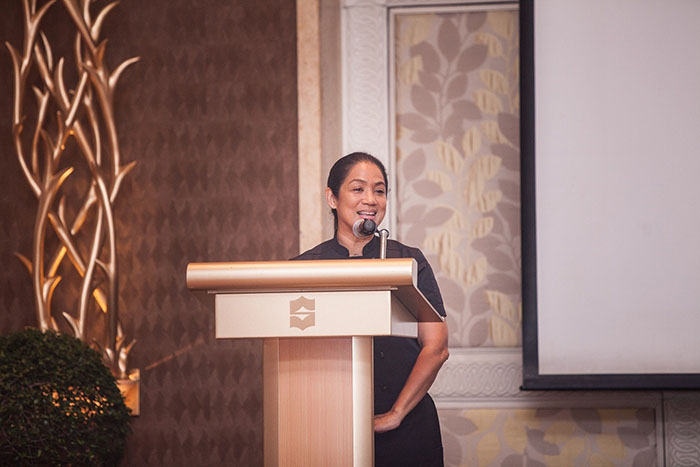 Asia’s Best Female Chef of 2016 Margarita “Gaita” Forés of Grace Park talked about how the gathering of chefs came to be.

Makati Shangri-La Manila, another co-presenter, has showed its all-out support for this WWF-Philippines fundraiser as it very much aligned with the Shangri-La group’s “Rooted in Nature” philosophy and corporate social responsibility for a sustainable future in the Philippines, which is a manifestation of the group’s commitment to promoting greater traceability and transparency of food sources by working with local and sustainable providers. By 2020, the group’s goal is to serve 75 per cent more sustainably sourced food on their menus and through the “Rooted in Nature” dining experience, guests are enjoined in embracing and celebrating the benefits that sustainable food brings.