“When you go out to the world, your outlook and attitude should be positive. Do not take opportunities for granted.”

With these words, Chef Gina Lat Rousset shared her success story to a new batch of culinary scholars in an inspirational meet-and-greet for the ‘Cooking For Life Program’ of the Culinary Education Foundation (CEF). A total of 3 batches of students from indigent families in Quezon City listened to some of the luminaries in the culinary industry. This year’s batch of CEF scholars were mainly sponsored by the QC Rotary Clubs and The Rotary Foundation under the jurisdiction of the Rotary District 3780 led by Gov. Chito Borromeo. The program was adopted by the Rotary Club of Santo Domingo Quezon City as its signature project. 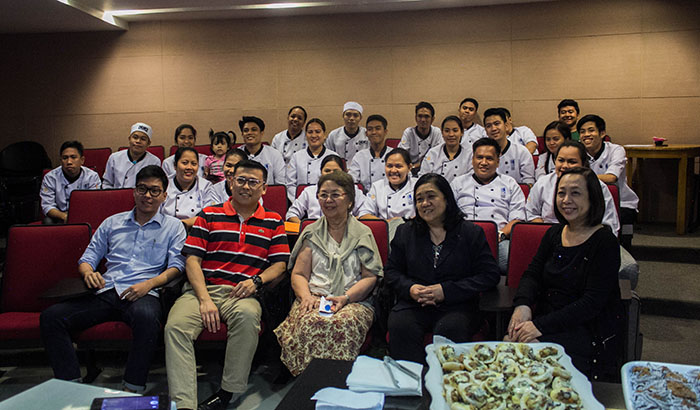 The event started with no less than Chef Babes Austria, a former Executive Chef at the Malacañang Palace and now a chef consultant to SM-owned hotels, giving an introductory pep talk to the scholars.  She shared her own definition of career, with each letter signifying goals or thrusts that each scholar should keep in mind – Capability, Attitude, Resourcefulness, Excellence, Exceptional and Rewarding.

“We go to school to develop our perspectives,” she said. “But when you go out into the world, your attitude should be positive. You aim for excellence, so you should not defy your boss’ expectations.”

Chef Rousset soon followed, wherein she shared the experiences of her restaurant Asian Delices, which started as a hole-in-the-wall eatery serving Filipino dishes to pilgrims at Lourdes, France.

“We started with a small space and the food we served was basically Filipino cuisine,” she narrated.  “We were able to get a bigger space for our expansion. Other nationalities now like our cooking.”

Prior to the restaurant, she and her French husband started selling food at the weekend market.  When the French and other nationalities began to take notice of her cooking, she was encouraged to offer other Asian dishes. Chef Rousset started to notice that as her restaurant began taking customers, her skills weren’t keeping up with their demands. During a break she spent in the Philippines she learned about the CEF and met its president, Annie Guerrero. She enrolled in the CEF’s Cooking for Life Program. “I learned not only to handle food carefully but also in choosing people to work with,” she revealed. “I was impressed by one of my classmates, who at that time was working at Casa Roces.  So I invited him to join me in Lourdes.”

She also gave the insight on the attitude of foreigners when it comes to food handling and preparation. “The Europeans are very meticulous with standards of quality and safety,” said Rousset. “They will tell you if your food tastes too strong or not.  That’s why I tweaked the flavors to something that is more attuned to their taste.”

Johnny So, president of the Rotary Club of Sto. Domingo, Quezon City (RCSDQC), lauded the program for giving those with talents and skills in cooking an opportunity to improve their skills but were hindered by poverty a chance to become professionals in the culinary industry.

“We at the RCSDQC believe in the objectives and goals that Ma’am Annie Guerrero that’s why we sponsored this batch of CEF scholars,” he said. “By teaching them to ‘fish’ for themselves, we give them a more lasting aid, one that they can use in order to help their families. We will continue to support the program for as long as we see someone become successful like Chef Gina Rousset.”

The Cooking for Life Program is headed by Dr. Ma. Veritas F. Luna, Chancellor for Culinary Education of CCA Manila. For more information on how you can support CEF, visit www.cefmanila.com. Follow CEFPH in FB for more updates.