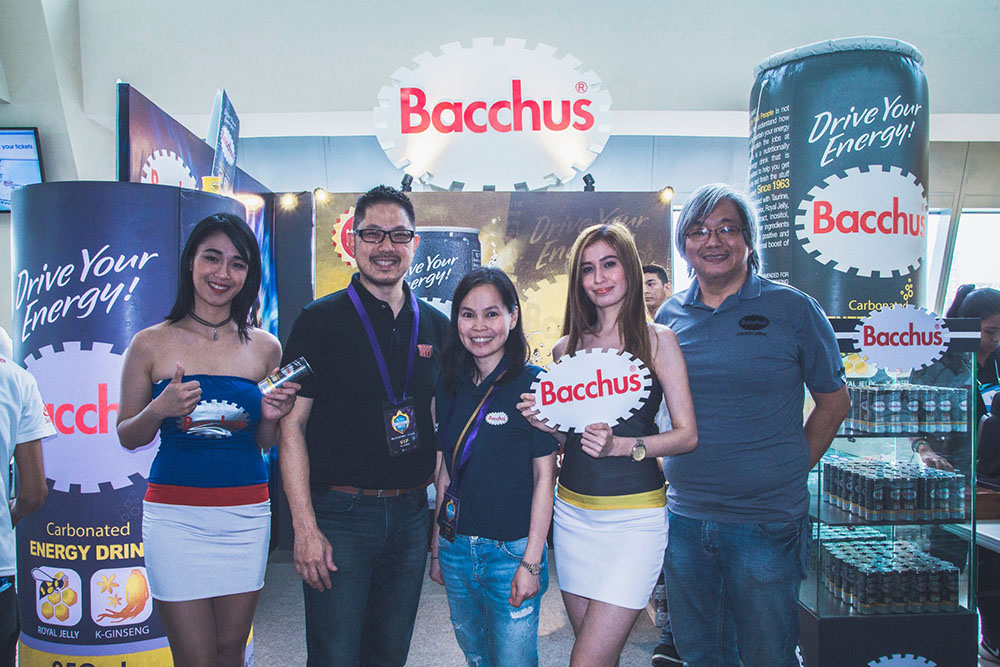 Dong-A Pharma Philippines Inc. CEO Amen Say (2nd from left) with Dette Briones (center) and Earl Yu of DPPI with models at a Bacchus booth during an E-Sports event.

From just a few thousands a decade ago, the Philippine E-Sports community is now a major force, counting almost a million active players who are now involved in the various aspects of E-Sports.

E-Sports or electronic sports are a form of competition using video games. Starting from an amateur platform, E-Sports in the country is now an organized, multiplayer video game competitions between professional players. Sometimes, celebrity players would be invited to spice up the competition events.  Proof of the rising popularity and maturity of the E-Sports community in the Philippines is that various major brands from the telecoms, smartphones and consumer products industries are now involved in the various conferences, meets, and competitions in the E-Sports calendar.

During E-Sports events, thousands of fans, young and old, gather in arenas to witness their idols slug it out with one another. Fans view the match in large screens, sometimes beamed online through livestreaming, and root for their teams.  Winning teams represent our country abroad where prizes sometimes reach a million dollars!

One of the brands that has been supporting the E-Sports community ever since is South Korea’s number one energy drink, Bacchus.  Bacchus maintained its winning streak in the E-Sporting scene by being part of the recent Globe Conquerors Manila 2018 tournament and The Net.com Cup.

During the Globe Conquerors events, thousands of e-gamers and enthusiasts crowded the final leg of the League of Legends SEA tournament held in Mall of Asia Arena. Bacchus rewarded fans with endless drink samples, games and promos.

With 2,000 mg of taurine, Royal Jelly and Korean ginseng, Bacchus Energy Drink is the ideal drink for e-gamers. It provides all the needed adrenaline boost, stamina and mental alertness.

“For three years, Bacchus joins this event as our way of supporting the e-gaming community. We want to give participants and fans that extra energy and extra push for them to exceed expectations,” said Amen Say, CEO of Dong-A Pharma Philippines, the exclusive distributor of Bacchus in the country.

Teams from the Philippines, Thailand, Malaysia, Singapore, and Indonesia battled live via Best-of-Five format in front of thousands of e-sports enthusiasts and fans.  Team Ascension Gaming from Thailand won as the champion among the conquerors. Aside from winning the prize pool of US$250,000, Ascension Gaming will also represent Southeast Asia at the 2018 League of Legends World Championship.

There was also the 3rd Celebrity Show Match which featured celebrity e-gamers played amidst screaming League of Legends fans as they battle in a game.  Other highlights of the Conquerors event include Cosplay Clash and band performances. The event was able to gather all e-gaming and video game fans who share the same passion in the industry across the metro.

Add to that, Bacchus was also part of the E-Sports Gaming Summit (ESGS) which was held last Oct. 26-28 at the SMX Convention Center.  It is one of the biggest event of its kind not only in the country but also in Southeast Asia. All ticket holders availed of Bacchus Energy Drink for only P20, a special limited price exclusive for the event.

“As our country becomes an E-Sporting hub, trust Bacchus to be supportive of this community. Ever since the start, we are the pioneer and we never wavered on our belief that the Philippine E-Sporting will exceed expectations and reach higher potentials,” said Mr. Say.  “Much like our brand Bacchus that gives consumers that extra energy to reach their full potentials.”