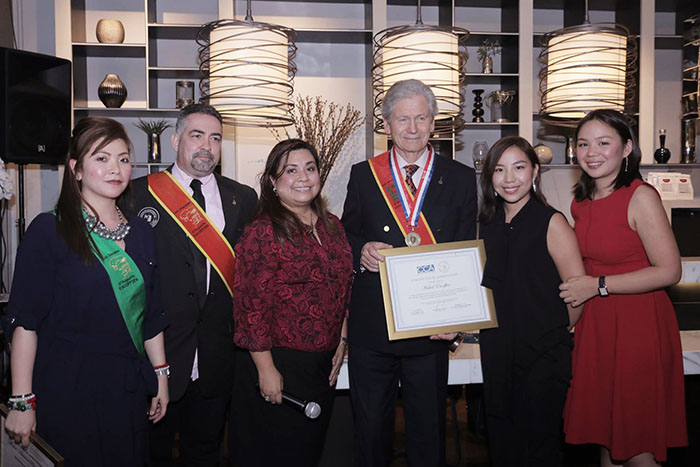 The Center for Culinary Arts (CCA, Manila) proved once more that it is the country’s most prestigious culinary institution as it celebrated its partnership with the world-renowned Institut Culinaire Disciples Escoffier (ICDE).

CCA, Manila welcomed Michel Escoffier, great-grandson of legendary chef Auguste Escoffier, the Father of Modern Cuisine.   Michel visited the CCA Makati campus where the 6 months ICDE program is offered to both students and professionals who want to undergo extensive culinary training under one of the world’s most prestigious programs.

Auguste Escoffier is known as the ‘King of Chefs and Chef of Kings,’ having served no less than King Edward VII and Kaiser Wilhelm II. Escoffier’s most notable contribution, however, is elevating the culinary industry by codifying French cuisine and authoring the culinary bible, Le Guide Culinaire, which remains to be the benchmark and guide of chefs to date when it comes to French cuisine. 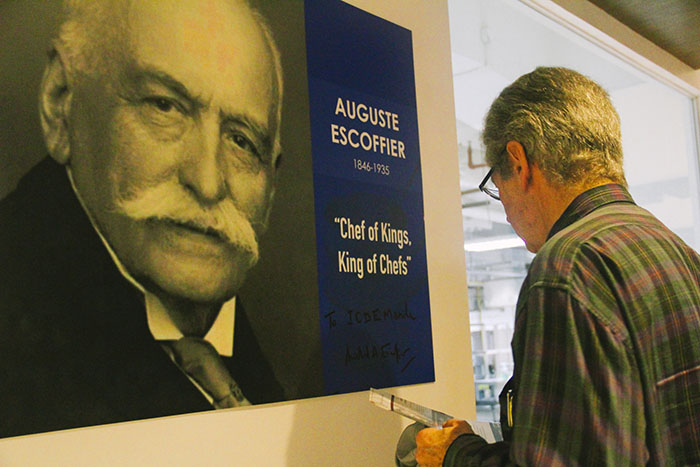 Michel Escoffier signs the mural of Auguste Escoffier, his great-grandfather, at the CCA-ICDE campus.

It is this legacy, which great-grandson Michel, hopes to instill and maintain via Foundation Escoffier based in Nice, France, which runs the Auguste Escoffier museum.

“The most surprising discovery I made about my great-grandfather during the early years that I’ve come to know about his works, is how vast his legacy is. In countries that I have visited, I discovered that almost all chefs in all the big hotels have his book and still use it as a guide,” Michel said, who visited the Philippines upon the invitation of the Disciples Escoffier Philippines.

The late Auguste has been known to be a visionary during his time, encouraging other chefs to go out of their comfort zones and create something new. His book was created to serve as guide on where to start in conceptualizing these new dishes.

“That is the same thing we want for ICDE and our partner schools like CCA Manila. We want to encourage new chefs to discover and create something new and use the teachings of my great-grandfather as guide,” Michel said.

Surprisingly, Michel is not a chef, but a professional with experience in urban development and telecommunications, having had a career with the World Bank and the United Nations. Despite this, he fully understands the contribution his great-grandfather made, and has now dedicated his life in ensuring the legacy of Auguste.

In 2009, Michel was inducted by the American Culinary Federation (ACF) into the AAC (American Academy of Chefs) Culinary Hall of Fame. The Hall of Fame recognizes personalities who have remarkable contributions to ACF, AAC, and the culinary profession in general. In the following year, he became an ambassador for the American Institute of Wine and Food and ACF. During his visit, Michel met with the students who underwent the French cuisine flagship program of CCA-ICDE which was held at the CCA Makati campus. He also graced a special charity benefit dinner of the Disciples Escoffier Philippines at Discovery Primea in Makati.

A poignant part of his visit was seeing the portraits and quotes of his great-grandfather at the CCA Makati campus, which Michel truly appreciated. He was also awarded a plaque of appreciation for his contributions to the culinary world by CCA Manila.

“The CCA-ICDE program is unique and truly world-class as it is the most authentic program on French cuisine. The fact that we are bringing in top chefs from all over the world and someone who personally knows the legacy of Auguste Escoffier is a proof that we want to expose our students to the best of the culinary world,” said Badjie Trinidad, CEO of CCA Manila.

The CCA-ICDE program in the Philippines already had a promising start. The pioneer batch -– consisting of professionals and students from diverse backgrounds –- was presented with three diplomas: the Escoffier Grand Diploma in Culinary Arts from ICDE, the National Diploma in French Cuisine from the French Ministry of Education (both of which are internationally recognized certifications) and a diploma in French Cuisine from CCA Manila.

Enrollment for the next batch of the Escoffier French Cuisine course is ongoing. For more information, call 218-8566 or 0917-5059370 or email: talktoccamanila@gmail.com, or visit: www.cca-manila.edu.ph. CCA Makati is located on 139 H.V. dela Costa Street, Makati City.